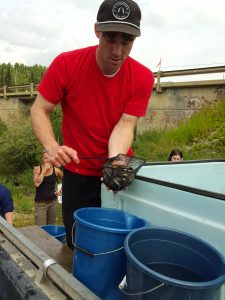 Fox Creek is a tributary to Lake Laberge, approximately 50 kilometres north of Whitehorse. Past surveys indicate that the creek once supported a spawning population of Chinook salmon. However, reasons for the disappearance of adult salmon in Fox Creek are unknown.

Salmon has long been a mainstay of the Ta’an Kwӓch’ӓn people and Fox Creek lies in the heart of Ta’an Kwӓch’ӓn traditional territory. Poor returns of Chinook salmon in recent years emphasize the need for stock restoration projects such as this one.

This year, we anticipate a much larger return of Chinook salmon than usual due to the release of almost 90,000 fry in 2012. Chinook spend between three to five years in the ocean before returning to their home rivers to spawn. 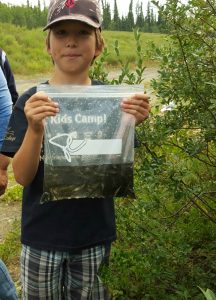 Alexander Labarge shows off the Chinook salmon fry he’s about to free at Fox Creek on July 17.

“Our vision is to protect and preserve the future of Chinook salmon for future generations.”

Funding for this project has been provided by the Pacific Salmon Commission through the Yukon River Panel R+E Fund. Other project partners include Yukon Energy Corporation, for supplying the eggs since 2009; the Whitehorse Fish Hatchery, for the brood stock collection, fertilization and rearing of eggs to the eyed stage; Yukon College, for its technical advice and management of the McIntyre Creek hatchery; the Department of Fisheries and Oceans, for its technical support; the Yukon Salmon Sub-Committee for program support; and the McIntyre Creek hatchery for receiving the eyed eggs and rearing them to the fry stage.